I was accompanied on this doubleheader day by my cousin Mike who loves all sports. We headed over to the Heat/Celtics game after this one. Before the game, we met up with Greg and Ryan who are fellow Basketball Passporters and rabid Boston U. fans. The brothers graduated from Boston University in 2013 and attend every home BU game. Greg reached out to me via the Passport web site so we decided to head to the Sunset Cantina before the game to talk about what else college basketball and specifically his beloved Terriers.

Boston U was missing four starters today through injuries but needed this game to host the first Patriot league tourney game. I was given the lowdown of the Terriers by Greg and Ryan. They have a strong passion for their team which hits home for me. They have also done a little traveling trying to bring up their Passport numbers. I found out that the BU head coach Joe Jones is the brother of the Yale head coach. I learned that center Blaise Mbargorba from Cameroon like many African transplants played almost no basketball growing up but was good at soccer. Amidah Brimah of UConn has the same story.  Greg and Ryan left early to catch the senior ceremony but it was great to talk college BB with fellow fanatics. Thanks to Greg and Ryan for their hospitality! I never root for a team on my travels but in this case I was a Terrier fan for the day. 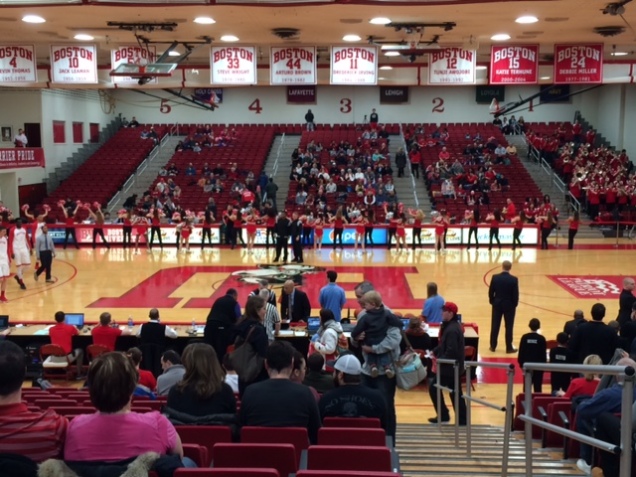 Case Arena was your typical small arena that I have come across in my journey. However, this was the first small arena where every seat was a chair back. We also had to climb a few flights of stairs because the arena is on top of the building.

The pep band was loud. The crowd was very enthusiastic. John Papale was one of the seniors who put on a great shooting display. I came to learn later on that he was named on of the top 25 3-point shooters in the country by ESPN.

I was impressed with the play of previously mentioned 6′ 11″ B.U. center Blaise Mbargorba. He look very polished and comfortable with outstanding footwork and a soft touch. He is a junior so I will keep an eye on him next year. 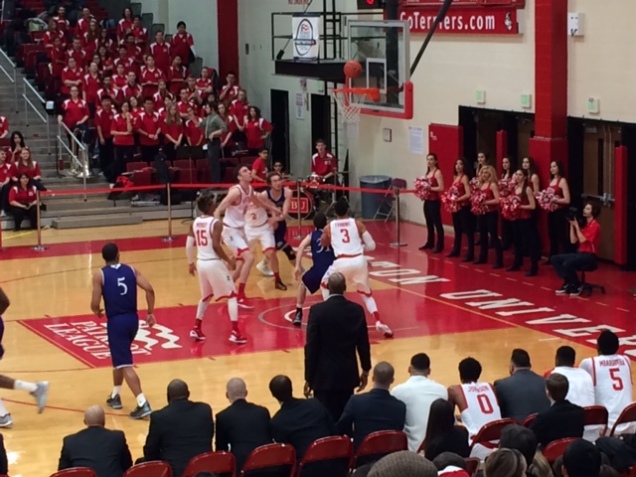 So here is my meaningless rant for the day. When the cheerleaders throw T-shirts in the crowd, can they sometimes climb the stairs and reach some of the folks who are sitting up higher up? Now I don’t really want a T-shirt but I witnessed a little boy in the arms of his father who was crying because the shirts were never thrown close to him. You could make the case that the father should teach the boy that life is very hard and to get a grip. Had I caught one, I would have given it to him. 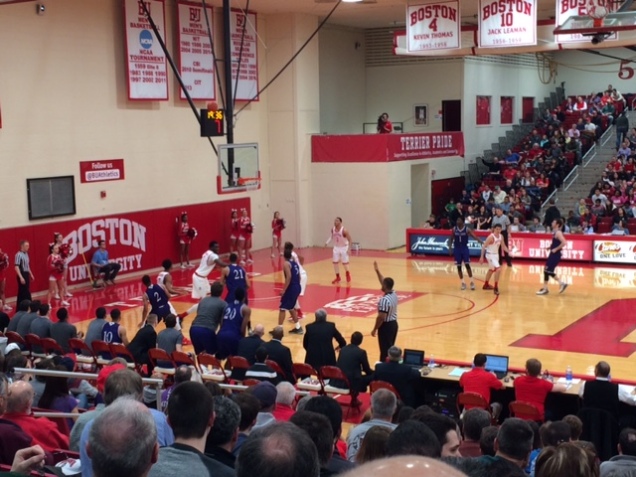 Despite being short handed, the Terriers went on for a victory over the Crusaders. Boston U. fans await the Patriot tourney because winning it all is their only hope of making the NCAA dance. Hey Greg and Ryan — I will  be rooting for you!

Cookeville, Tennessee. Ever heard of it? Me neither. But here I was in Cookeville on a Saturday night in February. I was driving from Chattanooga to Cookeville accounting for the one hour difference in time. Yes, Cookeville is on Central Standard Time. As I pull  into the parking lot 2 hours two early, I see a parking lot full of cars. My plan was to find the school first and then head off to a local watering hole. Piquing my interest, I pulled into the parking lot and after much difficulty found what I think was the last parking spot. I headed inside to find out that this was the infamous girls/men doubleheader. Knowing somewhere that I heard Tennessee Tech had a good women’s program, I headed to my seat and watched the second half. No commentary for the ladies game will be found here.

This was a dress in pink night to support a cure for breast cancer as you can see above.

So naturally, the women’s game heads into overtime. I am calculating in my head the return time to Chattanooga (actual time was 1:15AM). The Tech women won so the crowd was in a good mood for the men’s game.

I am all for getting a free T-shirt thrown by a cheerleader. Although never having caught one during my journey, my dream is to catch one and hand the t-shirt to a child whom I just stepped in front of to catch the t-shirt. The crowd will erupt with mild applause. I will shake it off like this is something I do every day. But the Tennessee Tech folks have an annoying of throwing t-shirts DURING the game not during a time out. The crowd would stand up begging for a t-shirt blocking the view of folks who could care less. 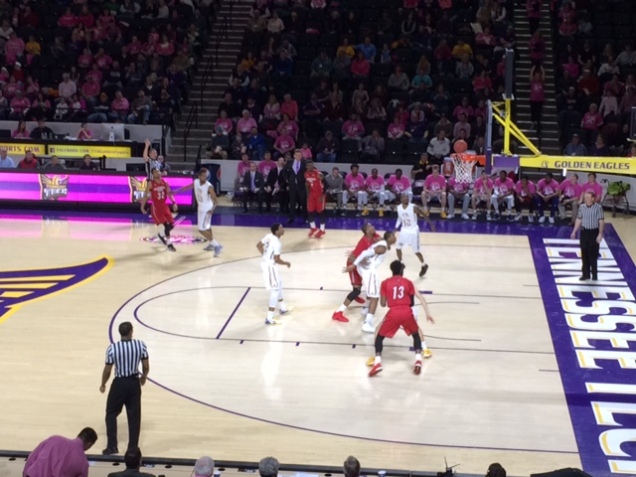 This was the most exciting game of my journey so far. The scored was tied at 70 with about 7 seconds left. Tech takes the ball down court and shoots a wild three pointer with virtually no time left on the clock. He was fouled in the act. The Tech player sinks 2 out of 3 foul shots and wins the game.

Both teams are in the Ohio Valley Conference which I think is a league made up for teams that no other league wants. But I have noticed that the size of the scoreboard is inversely proportional to the size of the program. The scoreboard was huge and brilliant. OVC – not so much. 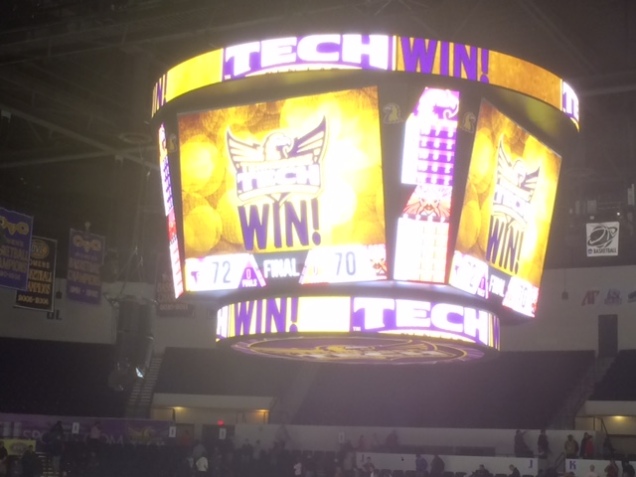 After the rousing Virgina / Virginia Tech game, I was stoked for another ACC barnburner. I was sadly disappointed by the small and lackluster crowd. I forced myself to cheer for my daughter’s alma mater Wake Forest but there was a noticeable pall in the air.

The GT fans have a very strange ritual. Partway during the game, they suddenly stand and squat up and down to what I think was a fight song. If there is a couple, they alternately do the squat with each other. One goes up and the other goes down. I am all for college traditions but the old folks doing this dance looked very silly. 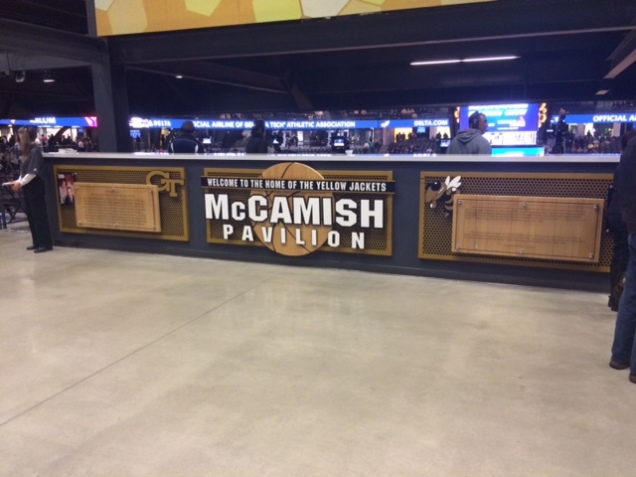 The arena was big and modern but seemed oversize for the crowd at hand. Georgia Tech did have great teams in the old days led by Mark Price and John Salley but lately their teams have been mediocre to say the least. We ate at the Bullhouse located a couple blocks north of the arena. The place did have many professor-looking like GT fans awaiting the game.

I was impressed with Georgia Tech guard Marcus Georges-Hunt who led all scorers with 30 points. He was a smooth shooter who should be appearing on many projected draft boards.

Kudos to the enthusiastic pep band especially the guy in the first row at the far end. He would let out a blood curling scream with each foul shot by the opposing team. 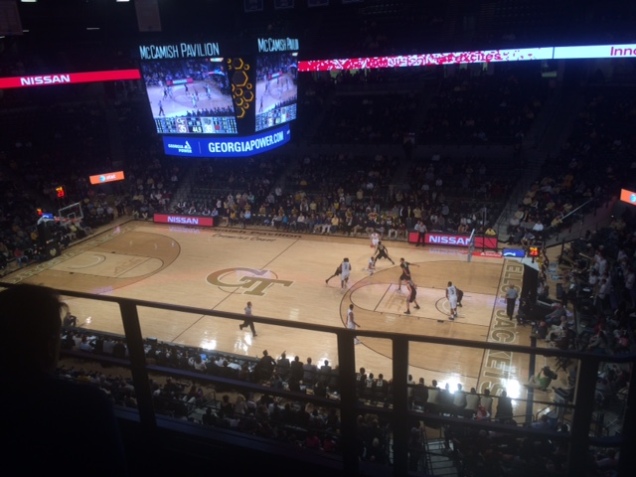 This is the first game of three games planned for my Tennessee road trip from Connecticut. To break up the ride down in my friend Kevin’s truck, we stopped overnight in Charlottesville, Virginia to catch a Virginia game. Virginia is the 7th ranked team and has been a perennial powerhouse in the ACC. I was looking forward to my first ACC game between two traditional rivals.

Before the game, we had a great burger and beer at Boylan Heights pub located in downtown Charlottsville. There were many Virginia fans in house in attendance. I enjoy finding these places before games because it adds to the excitement of the game. 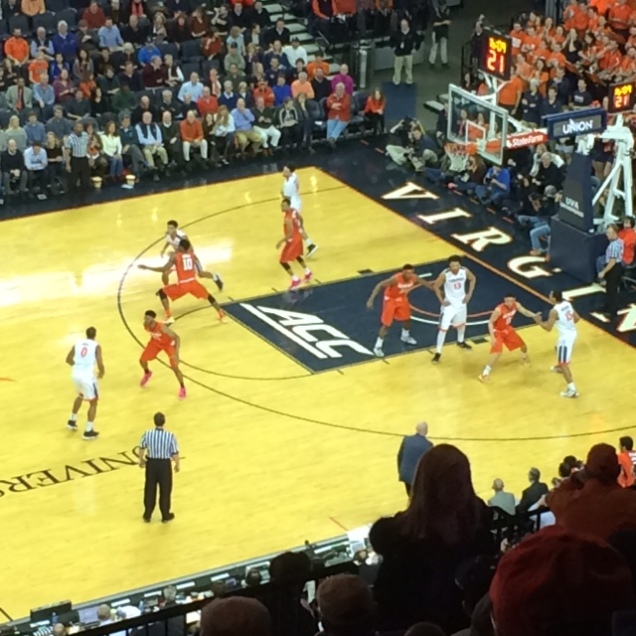 The fans kept yelling “hoos” throughout the game. I obviously had to look up the meaning of this. From Wiki, here it is:

The media generally refers to the University’s athletic teams as simply Virginia for short, and the name of Cavaliers represents the University’s official mascot of a mounted swordsman. An unofficial moniker, the Wahoos, or ‘Hoos for short, based on the University’s rallying cry “Wah-hoo-wah!” is also commonly used. Though originally only used by the student body, both terms — Wahoos and ‘Hoos — have come into wide usage with the local media as well. 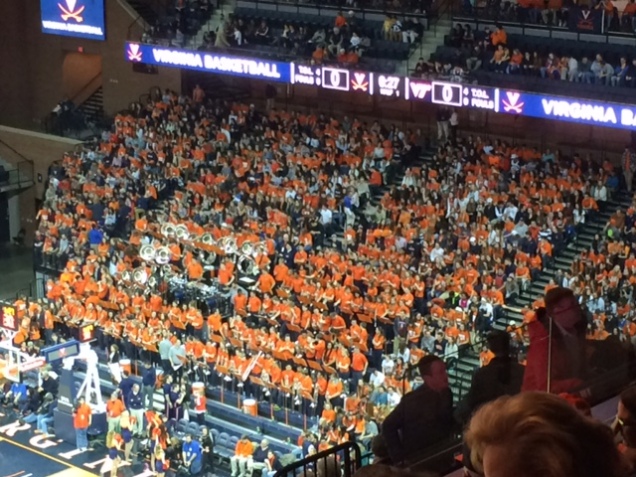 Virginia completely manhandled Virginia Tech throughout this game. Surprisingly, VA Tech had beaten Virginia earlier in the year. The VA team is well balanced led by Malcom Brogdon and Antony Gill. They will be their usual tough out in the NCAA tournament. I was impressed by how loud the noise was in the arena no doubt helped by the steep upper level stands amplifying the acoustics.

The scoreboard should be a model for scoreboards all across America. Are you listening – XL Center in Hartford? It has everything you would want in an organized palette.