I avoid see Division 2 teams play Division 1 teams like the plague. It is never a contest and most always results in blowouts like it did tonight. However I do have extenuating circumstances which made for an exception.

As I stated in a earlier post, my wife miraculously agreed to seeing a second game on our North Carolina trip. If you look at the map, UNC Asheville and Western Carolina in Cullowhee are fairly close to each other. If I did not do Western Carolina this time, I would have to make a separate trip and go to great lengths on that trip to see a second team probably in Tennessee or South Carolina. Make sense?

I won’t talk about the game much because it was tough to watch. Western Carolina had superior height and quickness over the the Division 2 club. I will note that Western Carolina sets the record for most cheerleaders in Operation 351 so far with a grand total of 23.

I knew that this was trouble when I saw the upper level seats covered with black cloth. I wondered why Western Carolina would schedule a D-II club late in January. A little research brought up the fact that this game was originally scheduled on 12/8/17 but was canceled due to snow. What made it worse that Southern Wesleyan was not even a good D-II team. They were 1-9 in their league and 2-17 overall.

Here is a little sad news. The Western Carolina mascot is the catamount which was declared officially extinct this week.

Here is a picture of one: 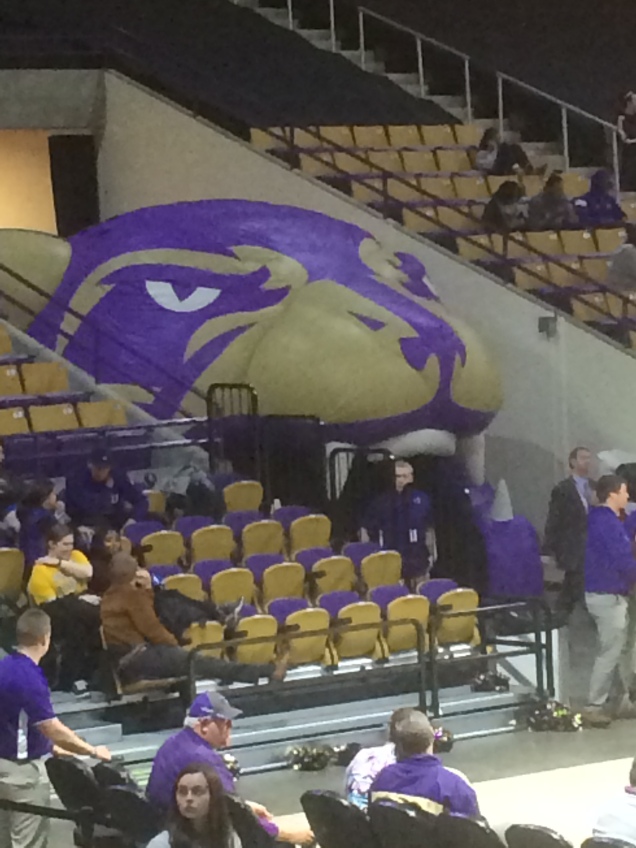 That’s all for now.

My wife Linda is not a college basketball fan or a sports fan in general. She agrees to go on one Operation 351 trip a year as long as other activities are included that are for her. So this year, we picked the see UNC-Asheville followed by a visit to the Biltmore Mansion.

As you can see below, she is prepping for the game by reading a book on the Biltmore Mansion. However, she will shock me with a surprise which I reveal later below.

I need to include a picture of the Biltmore Mansion because it is well worth a visit if you are in this area. But that is as far as I will diverge from the Operation 351 mission. 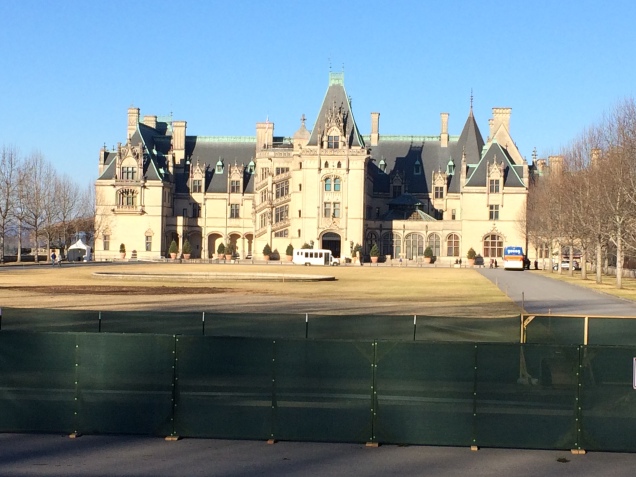 As is customary, I always point out items that are a first for me during the Operation 351 journey.

The UNC Asheville mascot entered the arena down a rope at center court. I think that this is a voluntary position or may be paid with a hot dog at the end of the game but that would be definitely be outside my job responsibilities if I were the mascot.

This blood pressure machine located in a college basketball arena is a first for me. My beloved UCONN boys have suffered through a terrible season and now are under NCAA investigation for recruiting violations. Based on some of the UCONN games personally attended this year, my blood pressure would have read off the scale if this baby was at the Gampel Arena.

This is the first game in the Operation 351 journey where the mascots are the SAME for both teams. – Bulldogs. The scoreboard could only use one mascot name for the team. They chose to use GWU for Gardner-Webb.

Gardner-Webb is from Boiling Springs, North Carolina which is only 1 1/2 hours away from Asheville. I sense that there is a rivalry between these Big South league teams. A loud and raucous group of Gardner-Webb fans showed up to cheer on their team. It was all good natured ribbing between the student bodies. 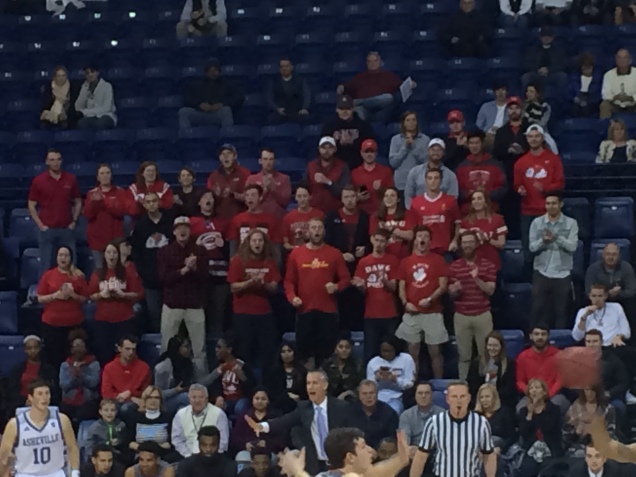 The game was back and forth throughout the entire game. I was kidding Linda that this game could go into multiple overtimes prompting a scowl on her face.

I enjoyed watching Kevin Vannatta of UNC Asheville play. He was a hard nosed kid that played hard and wore his emotions on his sleeve. He was the type of player that you hate to play against. His spirited play helped the Bulldogs (oops UNC Asheville) pull the game out at the end.

Yes that is a Hardees mascot in the corner.

The arena was an excellent place to see a game. I always wonder how branches of state universities afford such great arenas but I guess North Carolina must be doing well.

Welcome to the smallest pep band so far in Operation 351. There were some older folks in the band. Perhaps the flu struck down the entire band and replacements were called in. 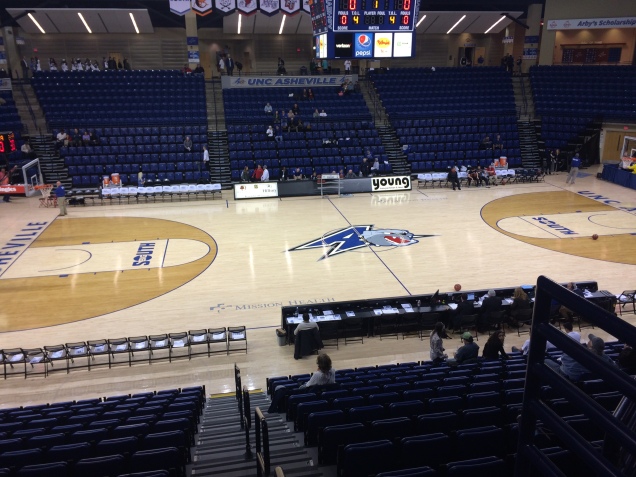 So I am saving the biggest thrill of the night for last. In all my Operation 351 games to date, I have not a caught a T-shirt. Tonight I modified my technique to hug the shirt to my chest instead of having it bounce off my hands into the row in front of me.  SUCCESS!

Of course, the “GASES” part brought chuckles from my wife and kids.

As I was contemplating what to do on our off night, I happen to glance at the Division 1 school map of the United States. Western Carolina looked pretty close about one hour away. I saw that Western Carolina was playing. I jokingly mentioned it to Linda not expecting to hear the words “Sure let’s go!”.  Of course, I rewarded her with more shopping trips the next morning but it was worth it. What a trooper!