I have been on a couple of trips recently where I was staying overnight in a private residence. The owner was working and could not meet me early in the day to hold my bag. Such was the scenario on this trip with my daughter. I discovered an app called Vertoe that hooks you up with small vetted businesses that hold your bag for $5.95 a day. I have used Vertoe two times in D.C. using a Chinese cleaners and a gourmet deli. These kind of UBER apps providing on demand services are the wave of the future.

So a word of warning to fans wanting to catch a game at the Charles Smith Arena to see a George Washington game.  As you can see from the picture, a first row seat in section 214 provides a rail to partially block your view of the court. I assume that this is the case with any front row in the upper section. We made nice to the usher and moved down to a center court seat in the lower section. For the second day in a row, I was accompanied by my DC resident friend Gregory who writes for Stadium Journey.  He loves college basketball as much as I do.

I saw the largest human being ever on a college basketball team. Duquesne freshman Dylan Swingle is 6’11” and weighs 300 pounds. He is not fat either just huge. I can not imagine what he did last year to opponents in high school at Chillicothe, Ohio. Unfortunately, he never saw a minute of court play today. 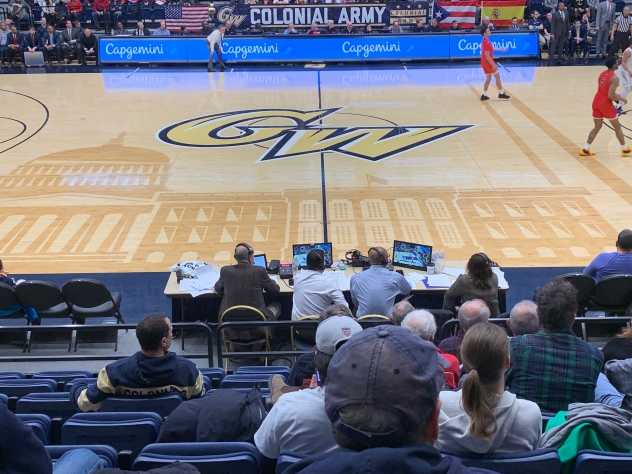 Red Auerbach was a graduate of George Washington and is commemorated with a flag and a plaque.  Another unrelated fact is the GW court has a white background of the Capital and White House. 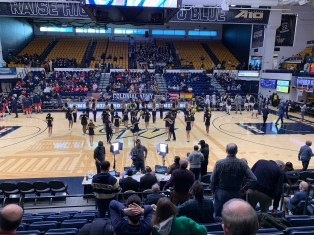 So on my travels, I enjoy picking out freshman from mid majors and look for a star in the making. Keep your eye out for Duquense freshman Sincere Carry. He looks like Tyreke with a full beard and the appearance of a 25 year old. As a Mr. Ohio finalist, this kid was the glue for the Dukes who made several big shots and ran the offense distributing some excellent passes. GW fell behind huge at the beginning of the game but fought back to send it to overtime unfortunately losing in the end. This was my second OT game in a row. 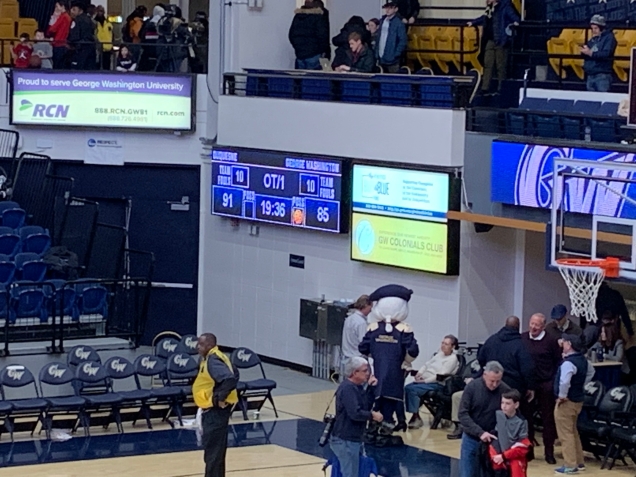