The drive from Connecticut to the sleepy little hamlet of Hamilton, New York took about 4 hours which is my upper limit for driving. I was fortunate to miss a big snowstorm the night before that dumped a foot of snow in the area. Over the years, I have developed a few rules of the road which I will share off and on in future posts. My first rule states that if at all possible, find a local restaurant to eat. Do not go to a franchise chain! Although the food is sometimes hit and miss, overhearing conversation through parts of this country gives you different perspectives on people’s lives. I often use Trip Advisors to find the good places. If the restaurant has a name in it like Tony’s or is family owned, all the better! 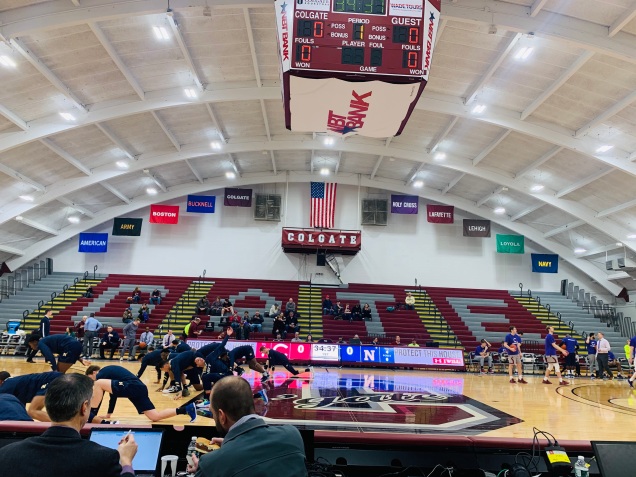 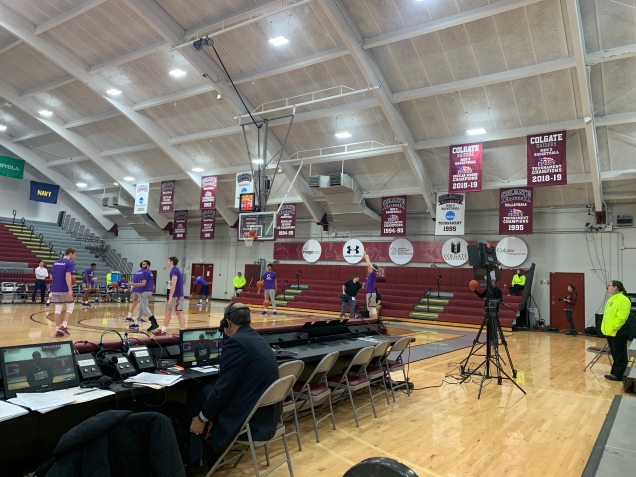 I saw something very moving during the national anthem at the game. Three cheerleaders stood out in front of the line and signed the anthem for the hard of hearing folks in the crowd. This was a first for me which I think more schools should do.

The winterly scenes was very picturesque but some of the unplowed roads made for some nervous driving. There was not much room for parking but I found a spot across the street. When I left the game, I was blocked in by somebody visiting their daughter. The mother held a cute Yorkie in her arms and apologized profusely. What could I say?

Colgate is in first place of the Patriot League. With an NCAA appearance last year in March Madness, they seem posed to make another run. The Raiders lost a heart-breaking game to Tennessee last year. They have very talented and experienced team with height and quickness. Navy put a valiant fight but was just did not have the chops to keep up. Rapolas Ivanauskas a 6’ 10” junior forward put on a show for Colgate at the end dominating the glass on both ends of the floor.

Cotterell Court is an old-style arena built in a barracks fashion. The ceiling is curved supported by steel arches. Built in 1959, it shares a building with the hockey rink just like Merrimack does as noted in my last blog. Unfortunately, I sat near a fan who complained loudly about each call against the Raiders. For about 99% of the time, he was wrong in his assessment but I loved his enthusiasm. 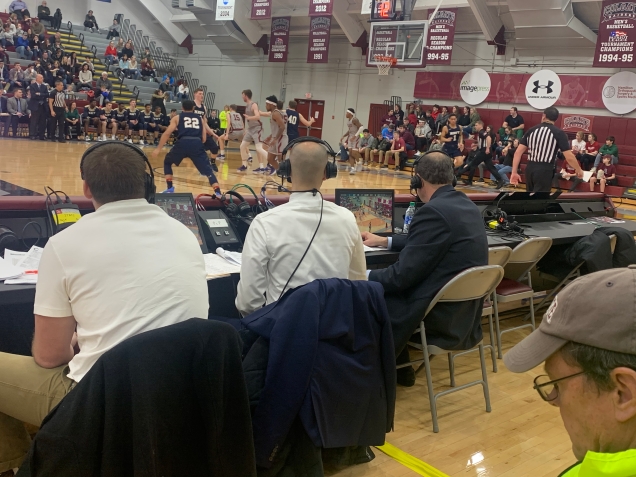 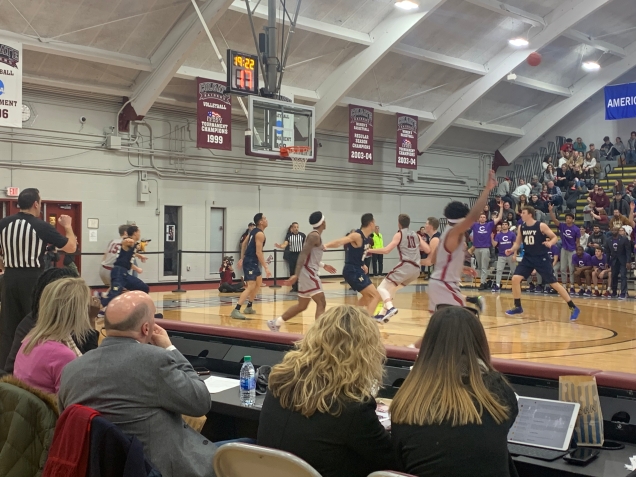 I have a big shout out to Brigid St. Leger who is the Assistant Athletics Director for Marketing and Fan Engagement. She put me in touch with Robert Cornell after the game. Robert was the Colgate Sports Information Director for 33 years and shared some stories about Colgate basketball. Adonal Foyle put Colgate on the basketball map back in the nineties. Foyle was born in Canouan, St. Vincent and the Grenadines. At the age of 15, Foyle was adopted by Joan and Jay Mandle, professors at Colgate. His illustrious career at Colgate resulted in Foyle being the 8th pick of the 1997 first round NBA draft. Robert told the story how reporters and photographers would make him stand in the New York snow to contrast his birth in a hot Caribbean country. Foyle absolutely hated doing this. Robert also credits the Colgate coach Matt Langel with rejuvenating the basketball program which was primarily a hockey school. Thanks, Brigid, for your hospitality!