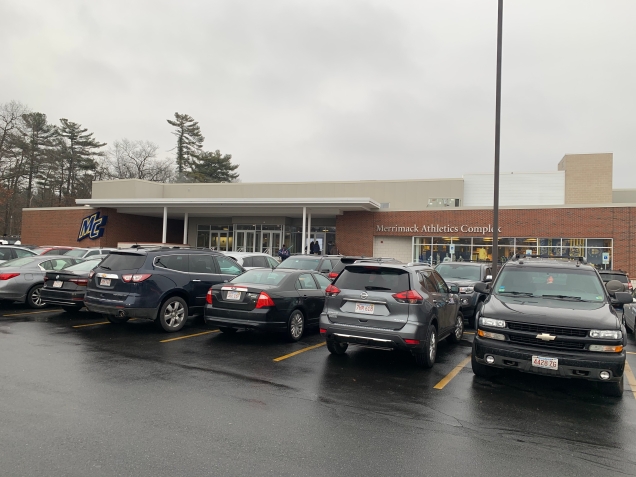 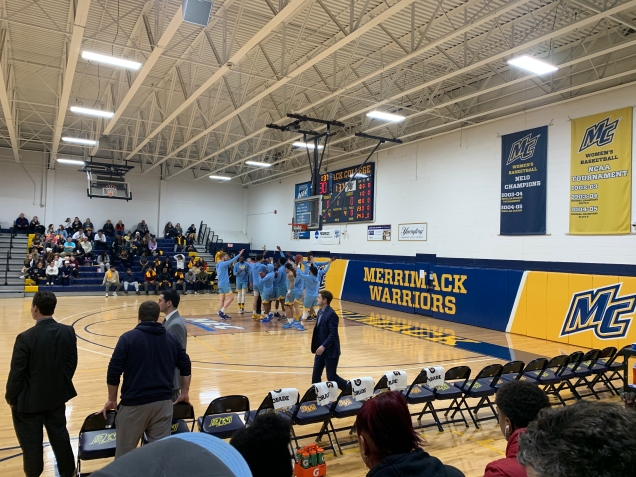 One of the few disconcerting parts of this journey is the moving target towards the final goal. It is especially disheartening when you have an accomplishment that goes awry because a school decides to go to Division 1. I had all the New England states complete till Merrimack made the move to Division 1 this year. The hole in my accomplishment ego was too much to bear so I made the trip to Andover, Massachusetts to re-accomplish my goal. My rule of adding new Division 1 schools to my list over the course of my journey includes schools moving up the ladder to D1. Conversely, I will not be visiting Savannah State since they dropped to D2. So an interesting scenario comes to mind. What if I visit a school then they drop out of D1? Do I pull it out of the blog or sequester it to a separate part of the blog with a special notation? I will cross that bridge when I have to.

The away opponent Long Island University also brought up a special situation. I had visited LIU Brooklyn in February of 2017. Since then, the LIU Post campus (a D2 school) merged with LIU Brooklyn (the D1 school). Do I consider this a new school requiring a new visit? Since my mission states that my mission is to visit every D1 campus to see a game (except when there is no campus arena like Georgetown), I have satisfied this requirement with LIU. This rule holds true even if a new arena is built on campus. I do not go back to visit new arena where I have previously visited. My journey, my rules!

I went in the worn entrance to Merrimack athletic center and had to walk through the hockey rink to get to the basketball arena. The Merrimack hockey program has been a national power for years. Quinnipiac and Merrimack are the only two schools I have visited that have a building sharing a hockey rink and basketball courts as separate facilities under one roof. On a side note, the new UCONN hockey arena holding an insufficient seating capacity of 2500 seats should be ditched and a new building holding a basketball and hockey arena would make more sense. Sorry for the digression but perhaps some UCONN official is reading this. 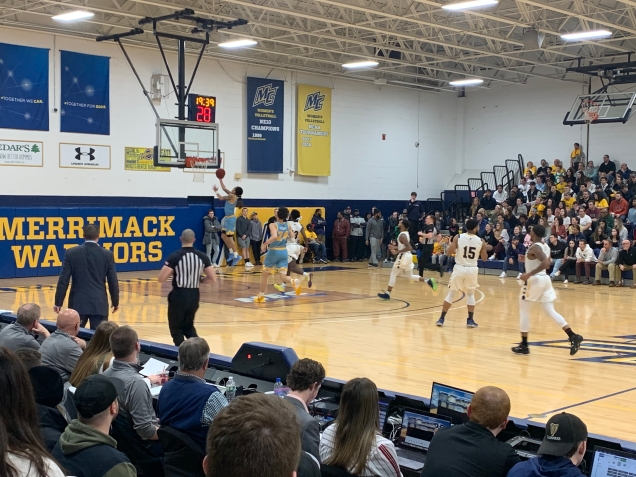 I am sure that there are financial shortcuts needed when first transitioning from a D2 school to a D1 school. That was evident watching the audio/visual set on display during the warmups. When the Merrimack starting line up was introduced, the lights went out and the recorded music started blaring. There was a person in the corner of the court with a small single spotlight attempting to make circles with it as he pointed the light towards the starting players as they were introduced.  You would catch a face here and there as each player was introduced. After seeing some pretty cool laser and light shows throughout the journey, Merrimack should look to upgrade its warm up show. 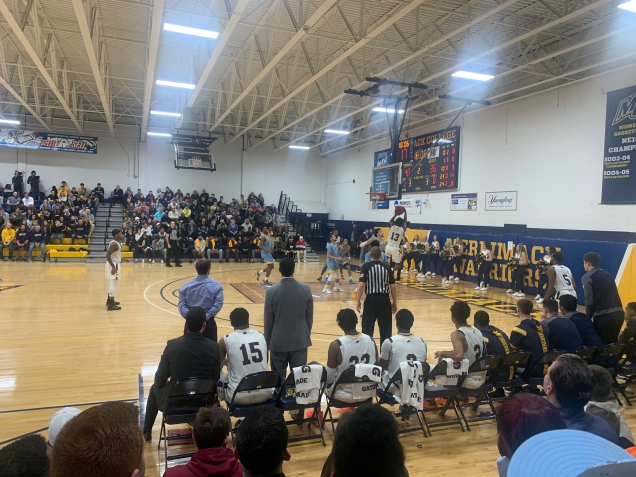 Congratulations to Merrimack in their first year of D1 basketball! They are currently in first place in the NEC league with an 8-1 record including an impressive road at Northwestern. I was impressed with their stifling zone defense that gave LIU fits all afternoon long. The place was filled with loud fans with many waiting at the door to come in during the time outs. Head coach Joe Gallo ( yeah I thought of My Cousin Vinny too) is in his fourth year with an impressive 75-42 record.