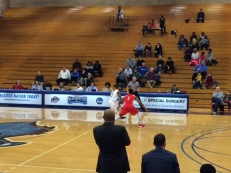 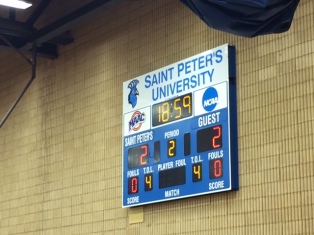 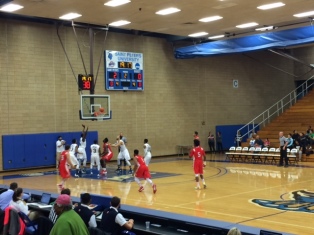 With all due respect to the residents of Jersey City, I can safely say that this will be my last voluntary visit to Jersey City. Stadium Journey had warned that finding a bite to eat around the campus would be tough but I was confident that there would be someplace to grab a burger and a brew. As I saw each potential eatery pass by with absolutely no parking anywhere to be found or blocked by construction paraphernalia, I drove through some sketchy neighborhoods before my hungry stomach settled on a Burger King with a parking lot.

With an attendance of 611 folks, the gym was not loud except for a Cornell parent sitting near by who cheered with exuberance for the entire game. To see that much excitement over a game with little national significance is one thing I love about college basketball. Passion for a local sports team is that one constant across the nation that knows no bounds defined by politics, nationality or religion.

There were two first for me in this game.

1). This was the first D-1 gym that I visited that did not have any seat-back chairs not counting the $50 courtside seats.

2). The St. Peter’s team threw out a t-shirt to the the crowd after being introduced in the starting lineup. More teams should do this.

The game was dominated by guards particularly Antwon Portley (St. Peters) and Robert Hatter (Cornell). Both guards were on the thin side but had great quickness and jumping ability. They were the perfect guards who excelled in this level of competition but would probably struggle in one of the higher echelon leagues. As I see more games, I begin to see the difference among player’s skill levels and why they are playing at the level they are.

I was impressed with Cornell’s fan base who made the trip down here. They easily out numbered the home crowd.

It was an awkward moment when fans were asked to stand and sing the St.Peters alumni song. I counted 6 fans participating.
Stadium Journeys: http://www.stadiumjourney.com/stadiums/yanitelli-center-s556