I escaped the brutally cold temperatures in Connecticut to take in a road game for my beloved UConn Huskies. I have developed some strategies for planning my journey in the future years. The first is to hit the cold weather states early in November or in early March before the league tournaments start. Navigating blizzards and polar vortexes is not on my fun list of things to do. Next year, I plan to visit the last four schools in upper state New York to complete the entire state. Beyond that in later years, North Dakota, South Dakota, Minnesota, Michigan and other north border states will be done early or late to minimize weather problems.  Secondly as my old bones age, I will save the southern warm states for my later years.  If I continue my current pace and continue to breathe, I will be hitting the last school in my late seventies. Florida, California and Texas shall wait for me! Thirdly, I hope to do one UCONN road game a year to add to my quest and get to see UCONN play.

I probably need to do a better job of checking distances to the arenas before heading out. My wife Linda accompanied me on this trip for her one obligatory game a year. As always, her attendance is predicated on extra curricular tourists trips as in Disneyworld this year. Before the game, we met up with an ex coworker who was retired and enjoying the Florida weather and cross country trips in a RV. I set dinner time at 6:30PM in a  Disney Springs restaurant  thinking I had plenty of time to see a 9PM game in Orlando. How big could Orlando be? As we sat down for dinner, one of us checked Google maps and saw that the arena was a freaking 45 minutes away much to my surprise. We made it with 10 minutes to spare but lesson learned!

To be greeted by palm trees entering the arena was a treat. The CFE arena is new and pretty spiffy inside. The overall effect is gold and black. There were many empty seats around me in the end section. Although the crowd was enthusiastic, I was surprised by the many open seats. I wonder if the tourist setting of Orlando contributes to a lack of fan interest from a transitory population. Pyscho babble at its best! 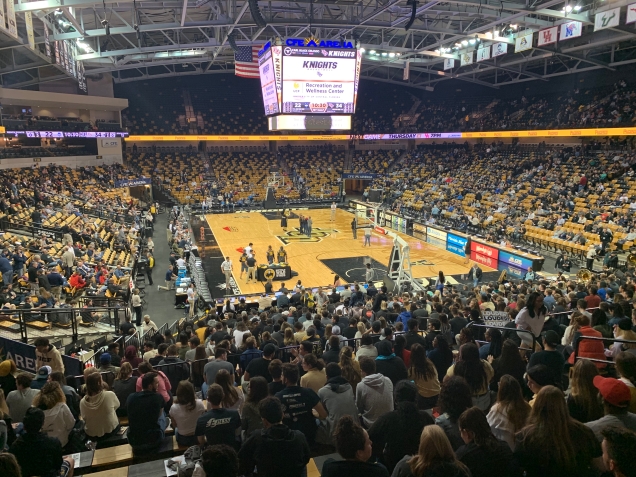 I have seen quite of few AAC games this year. I nominate B.J. Taylor of UCF as the player of the year. He has done the most to improve his club this year. Best known as a slasher, he has developed a sweet outside shot. He continually made the big shot tonight when needed. Conversely, I have seen little improvement of Tacko Fall over his career. A man of that size should dominate every night. The man is 7’6″ and weighs 310 pounds. It will be interesting to see if an NBA club will take a chance on him in the draft.

Now it is three days of fun in Disneyworld! Yeah I can still have fun there at my age. 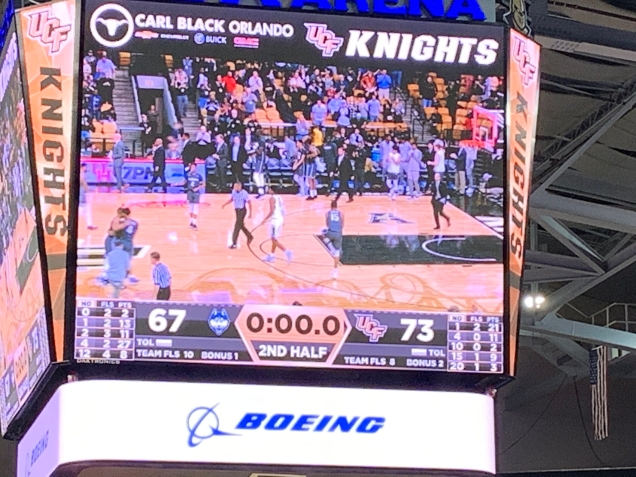