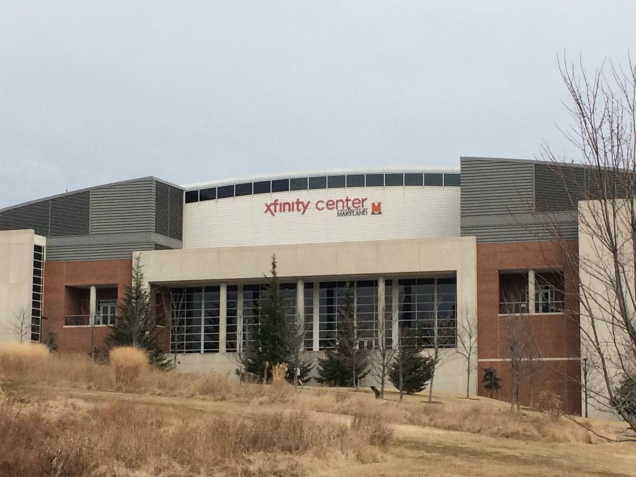 It was amazing to me to see such a large arena on a college campus. The Xfinity Center would rival any big city arena hosting an NBA team. What I don’t understand is how they are able to serve alcohol in the arena giving that it is located on a college campus. I am not complaining but it was a mute point. I’m not paying $12 for a craft beer.

Today’s noon game will be a doubleheader day followed by Georgetown at 4PM.  I try to schedule multiple games on a day or weekend given the fact that I am now flying to destinations or doing very long drives. The low lying fruit has been picked so to speak. My ultimate dream is to do a triple header on one day ideally a noon game, a 4PM game and a 7PM game.

I arrived early and did my 10,000 steps around the campus. This a typical Big 10 sprawling layout. I should have done a better job of researching the parking especially when it started raining. I followed a link on the UMD site for a $15 parking permit. The parking ended up being in a garage next to the football stadium. It was a 10 minute walk to the arena but I am sure that I could have snagged a STUB HUB parking pass for cheaper and closer.

I am reminded about that painful game in 2002 when Juan Dixon and Maryland defeated UCONN in the Elite 8 to go on and win the national championship. Caron Butler scored 26 points in the second half but it was not enough. Congratulations to Caron on his retirement and new book!

Let me announce that I had my first ever Chick-Fil-A sandwich at the arena. 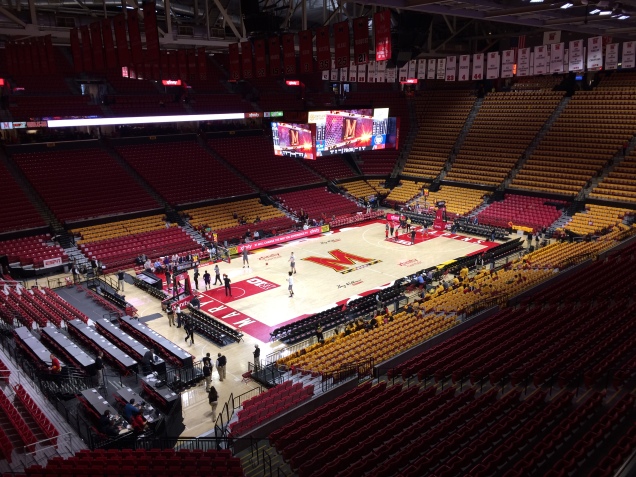 Maryland was giving away yellow shirts as part of their “Wear Gold” day. Only certain sections had them draped over the seat even with some in the upper levels. I could not figure any rhyme or reason for the placement of the shirts. So yes I sneaked over and grabbed a shirt off of an unoccupied seat in the second half. I don’t need a shirt and this one is ugly. However, it is the thrill of the chase that compels me.

Maryland has a neat tradition where they unfurl a Maryland flag in the student section from the top sections to the bottom.  They also repeat the word “oh” during the national anthem.

Maryland played an outstanding game. This Northwestern club is certainly not the darling team that everyone fell in love with last year during March Madness. Kevin Huerter from Maryland was raining threes. Anthony Cowan was penetrating and hoisting some beautiful floaters. Meanwhile, Northwestern looked very much out of sync.

Maryland is on the bubble. I am not sure how much noise they will make in March. It is difficult sitting during a game watching enthusiastic fans cheer on their team when back in Connecticut my beloved Huskies are facing dark times.