Arriving in Baltimore early morning well before the 1PM UMBC game, I drove to the Inner Harbor to tour the USS Constellation and a submarine the USS Torsk. I highly recommend this diversion because it gives one a true sense of the lack of comfort for sailors on these boats. Besides constantly ducking to avoid beams and the especially tight quarters on the submarine, my destiny back then would not have been in the Navy.

I chatted with a volunteer on the USS Torsk who happened to be fixing a fan but was working in the same area that he worked in back in 1965. He was in charge of some levers that controlled the throttle speed of the submarine. The submarine’s mission back then was to listen in on Russian subs near the Ireland coast. The torpedoes looked impressive and menacing.

I resolved this year to eat more healthy and to being visiting vegan restaurants on my Operation 351 journey.  As I finished touring the boats, the digestive juices did swirl triggering a look for a close by food place. Across the street I saw a Shake Shack calling my name. Another New Year’s resolution goes down the tubes!

So on to basketball…. 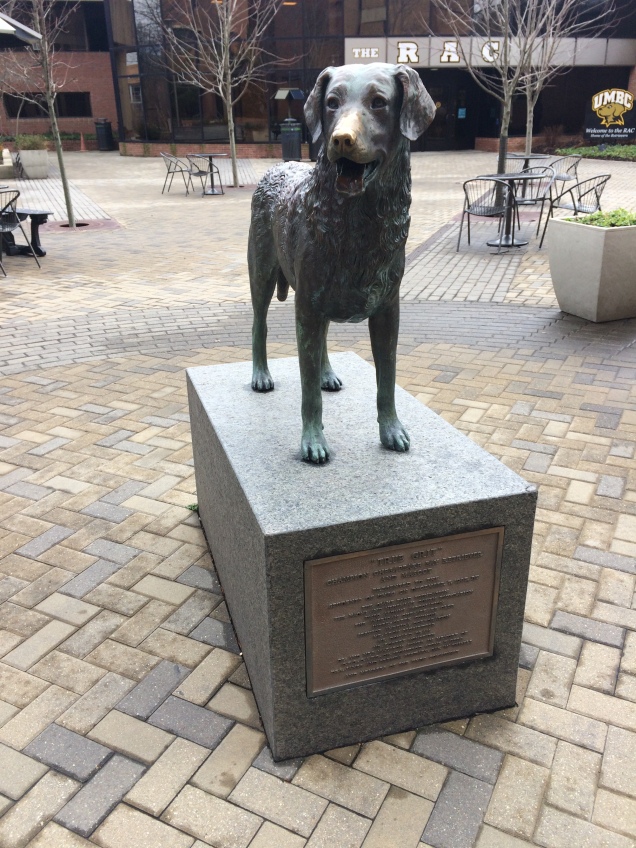 Not yet! I like to tour the campus sometimes before a game to get a little exercise. I ran into a dog named True Grit – the mascot of the University of Maryland at Baltimore County Retrievers. Rub his nose and you will get a lifetime of good luck. The model for the statue was a 5 year old Chesapeake Bay Retriever named Nitty Gritty. Although the university chose the name “True Grit” to symbolize the nature of the school, the dog Nitty Gritty did have the honor of pulling off the cloth at the 1987 dedication.

So really on to basketball..

The UMBC Events Center is a brand new slick arena built last year. As I entered the lobby, I was greeted by a sign proclaiming the event heard around the world. On March 16th, 2018, 16th seeded UMBC defeated #1 Virginia 74-54. It was the first time in history that a sixteen seed defeated a number one seed. In the team fan shop, there are t-shirts and signs proclaiming the win for sale.

This game was the America East league opener for both teams. UMBC standing overall at 8-7 and Maine at 2-15 were evenly matched in the first half but UMBC pulled away in the second half led by 6′ 10″ UMBC sophomore Brandon Horvath. His combination of three pointers and inside play proved the difference.

The Events Center arena proved to be an ideal place to watch a game. However, I do have one complaint. I am very used to looking at the scoreboard in the center of arena but this new arena did not have one. One has to look over to the side scoreboards or view the televised game up on the side wall. I kept looking up and then looking over to see the score. 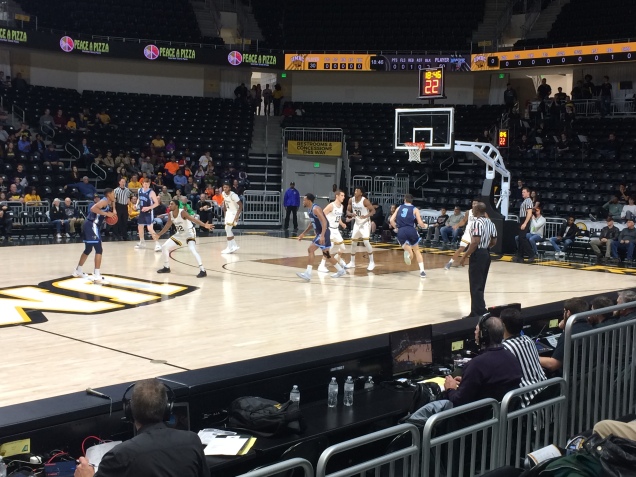 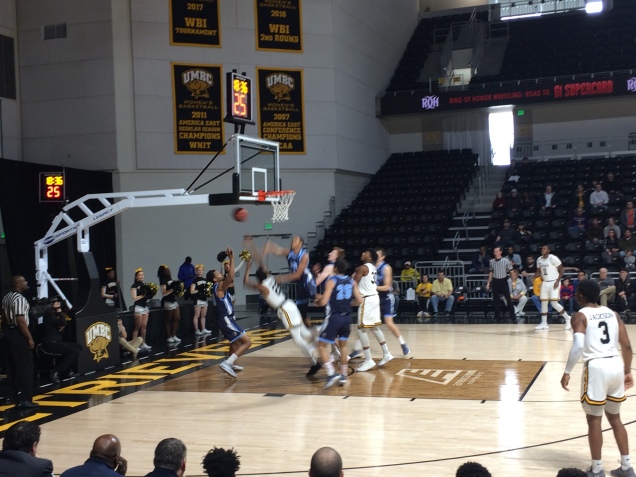 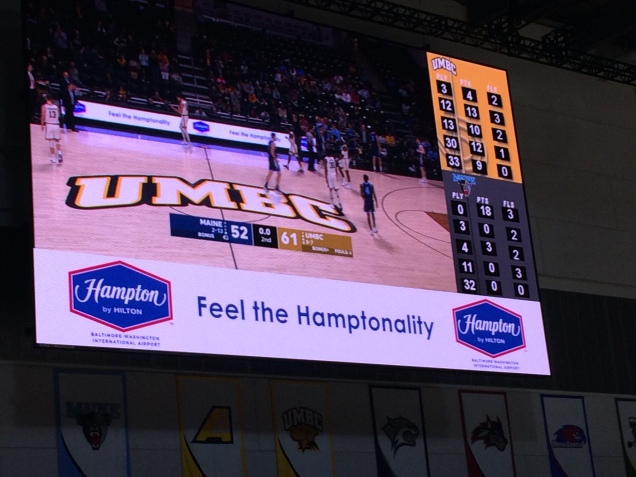 To conclude, I am at the airport in the TSA line. I over hear a gentleman discussing a 20 dollar bill that he found on the belt. The TSA man was reluctant to take it because I am sure there is no procedure on how to handle cash. I looked over and saw a Maine basketball backpack on this gentleman. As I took a closer look, I recognized him to be the head coach of Maine Richard Barron. As we both exited the TSA area, he was walking to the gate with his assistant Edniesha Curry. She is the only women coach for a D-1 men’s basketball program. So I introduced myself to them and told them about my journey. They seemed genuinely interested.  I told them that I was from Connecticut. Barron said that he was good friends with Geno. We said our goodbyes and we went off to our separate gates. I was mad at myself for not asking for a picture. Considering that he just lost a game and some stranger was talking to them while they had a plane to catch, both of them were very nice.

So I had time to catch a bite to eat and headed off to the nearest food place with beer. I am sitting there at the bar but guess who walks in. Yep and this time I was not going to blow it. I went over and asked for a picture. As I gave the camera to Ms. Curry,  Mark Curran said that Edniesha was really the “shining and upcoming star “.  So he asked a bar patron to take  a picture of all three of us.  Mark and Edniesha – I hope you reading this. I really appreciate you taking time to humor this old college basketball nut! Best of luck to you and the Black Bears! 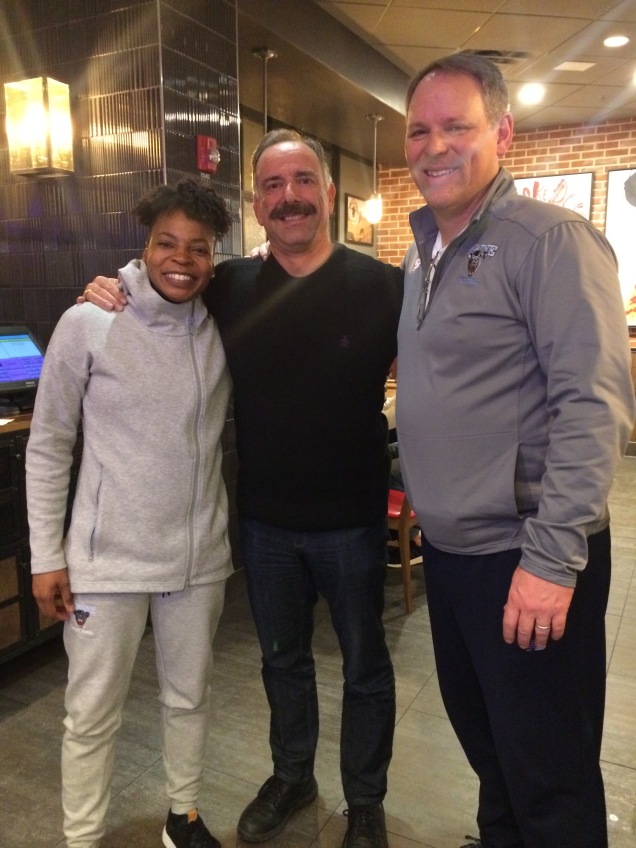