Coppin State is in a not so nice area of Baltimore. Riots protesting the 2015 Freddie Grey shooting was very near the Coppin State campus. That being said as I drove through run down neighborhoods, I was a little on edge. Having been unsuccessful finding a spot to park on campus, I parked along the street in front of the Physical Education Center. As I walked into the arena, I was greeted by smiles by the staff as I went through security. I found a seat in the center of the court and witnessed a very entertaining basketball game. No worries! 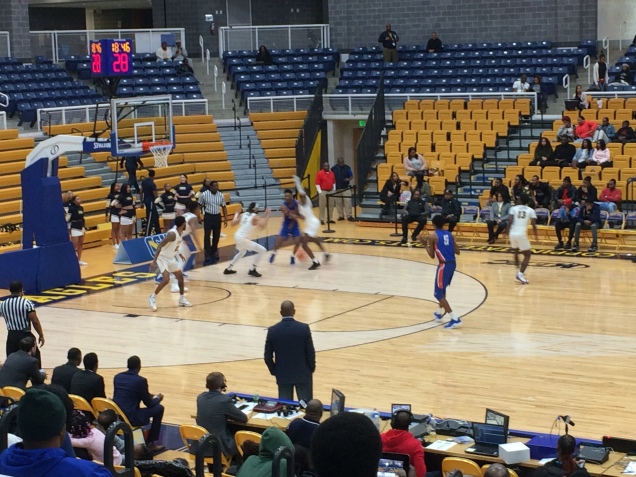 I tend to make UCONN connections as I continue on my journey. The head coach of Coppin State was Juan Dixon who scored 27 points for Maryland in a win against UCONN in the Eastern Regional final in 2002. The Savannah State coach was Horace Broadnax who played in a few Big East battles against UCONN in the 1980’s and helped Georgetown win the 1984 NCAA championship.

I rooted extra hard for Coppin State because they were winless at this point. Both teams showed so much individual talent that might suffice in a one-on-one battle but lacked the fundamentals needed for a winning ball club. There were many individual highlight plays but there was just too much individual vs. team basketball. Savannah State is dropping to Division 2 next year so I was wondering about the mindset of the players who expected to be playing Division 1 ball.

It was great to see the excitement of the Coppin State players winning their first game of the season. They had only lost by seven points at Notre Dame the game before so the talent is there. Good luck Eagles!